You are here: Home / Fires/Accidents/Disasters / Free smoke alarms handed out to firefighters from across the state 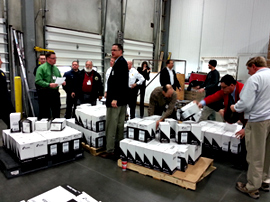 Firefighters from across the state traveled to Des Moines today to pick up hundreds of free smoke alarms.

State Fire Marshal Ray Reynolds purchased the alarms with money from a $245,000 federal grant and a $50,000 grant from State Farm Insurance.

Reynolds has a goal to install smoke alarms in every Iowa home with children.

The grants will eventually cover the cost of roughly 11,600 smoke alarms in 2013. And there’s plenty of demand for those alarms. 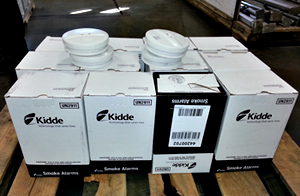 “There were 5,000 structure fires in Iowa last year and of those, one in five homes did not have working smoke alarms,” Reynolds said.

Firefighters from 18 Iowa cities picked up a total of 3,000 smoke alarms today as part of Reynolds’ project.