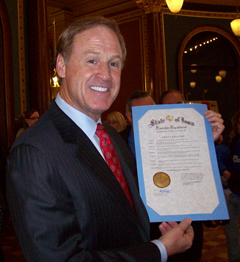 Rusty Wallace displays a proclamation from the governor honoring him for his work on the Iowa Speedway.

Governor Terry Branstad honored the man who designed and co-owns the Iowa Speedway in Newton today in a ceremony at the state capitol. Branstad signed a proclamation honoring Rusty Wallace during transportation day events.

“As a governor of Iowa, I am very proud to honor Rusty Wallace with this proclamation today. His many contributions to NASCAR racing have earned him a well-deserved induction into the NASCAR Hall of Fame. And his forward-thinking design of the Iowa Speedway helped to create a destination in central Iowa that benefits every Iowan,” Branstad said.

Wallace responded “yes I do” when the governor asked him if he had anything to say. “Thank you very much governor, I really appreciate this,” Wallace said. “I love the state of Iowa, I consider it like a second home of mine. I spent a lot of time up here, I’ve been able to have a lot of great friends and meet a lot of cool people — including you today.”

Wallace talked with reporters after the public ceremony. “When I heard what the governor wanted to do I was really excited about it. I meant what I said, it’s like a second home to me,” Wallace said.

“And to see the track be so successful and to have so many people show up all the time is a really good feeling. And to see the governor kind of honor me for that — and to honor the speedway for that — makes you feel good. And coming fresh out of being in the Hall of Fame with NASCAR, fresh out of a real successful speed week down in Daytona, and to come up here and get this proclamation — it’s just kind of like icing on the cake.”

Wallace was born in Missouri and now lives in Charlotte, North Carolina. He says he doesn’t have a home in Iowa yet, but wouldn’t rule out that possibility some day.

“I could see a second home in Newton, a second home in the state of Iowa. Whether it’s in Des Moines or Newton, absolutely I could,” he said. The Iowa Speedway opened in 2007 and Wallace said it is very popular with drivers and he believes the track will get the chance to host a NASCAR cup race sometime in the next three to five year.

“It’s a real tough deal because everybody knows NASCAR made a major announcement many years ago — it said we are only going to go 36 races — so if there’s going to be an additional race somebody’s go to get one from some other racetrack. So we are constantly working with other racetracks… and trying to get one of the events over here at Iowa Speedway.”

Wallace went into broadcasting after retiring from racing, and works in television when not at the Newton track.