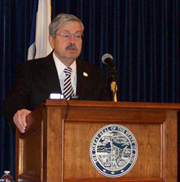 Iowa’s governor says it’s up to the coaches, not him, to decide if a pink decor is appropriate for the locker rooms visiting football teams use in Iowa City.

“I am not going to comment on the color of the locker rooms that they paint at the University of Iowa,” Governor Terry Branstad said today. “…I don’t think it’s worthy of the governor interfering with.”

Former University of Iowa coach Hayden Fry had the walls painted pink in the 1980s as a way to “psych out” visiting teams and current coach Kirk Ferentz has retained the tradition.

Two attorneys who spoke at a recent conference for lesbian, gay, bisexual, transgender and questioning youth in Iowa say the university is leaving itself open to allegations of sexism and homophobia. Governor Terry Branstad’s not convinced.

“That’s a big issue, my goodness,” Branstad said, laughing, when a reporter asked him about the controversy this morning.

Branstad said he is not going to “micromanage” the football team.

“First of all, they’re under the Board of Regents — the University of Iowa is under that — and then the Athletic Department’s under that. So I’m going to go down and tell the football coach what color he should be painting the locker room?” Branstad asked this morning. “The governor should not be doing those things.”

A spokesman for the university has said the color pink was chosen because it would have a “relaxing and calming effect” on visiting football teams, giving the Hawkeyes an advantage on the field.

Branstad made his comments during his weekly news conference. Find the audio here.