You are here: Home / Business / Lip balm maker is SBA Person of the Year 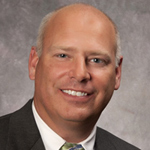 He and a partner bought the company a decade ago. Hammond says they saw great promise in the business that started in a family’s kitchen and had expanded to a dozen employees.

“We’ve been incredibly fortunate,” Hammond says. “We now have about 140 employees and we’re growing. This year, we will probably have close to 25 times the revenues that we did when we bought the company in ’03.”

Raining Rose manufactures multiple lines of lip balms using beeswax and other all-natural products for companies across the U.S. and overseas.

Hammond projects they’ll continue to expand. Hammond says, “We just moved into a new facility that’s about 125,000 square feet and we’re filling up faster than I thought we honestly could or would.” The company has overcome obstacles, including the death of his business partner, Art Christoffersen, from cancer in 2005.

The flood of 2008, which devastated Cedar Rapids, presented a different sort of challenge: it put eight feet of water in Raining Rose’s main building. “We have a group of people that just don’t know how to quit and won’t accept defeat,” Hammond says.

“The day the National Guard let us back in, we had a group of people go in and start cleaning it. I never asked them. They just showed up.” No employees and no customers were lost during the flood, and Hammond says they came back even stronger than before one of Iowa’s worst natural disasters hit.

Hammond will represent Iowa at National Small Business Week ceremonies in Washington, D.C. June 16-22 where he will be in the running for a national award.