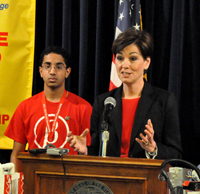 Lt. Governor Kim Reynolds during her weekly meeting with reporters.

Lieutenant Governor Kim Reynolds says she is encouraging the woman who took her seat in the Iowa Senate to consider running for the U.S. Senate.

“I’ve always been involved in encouraging and strengthening the bench of the Iowa Republicans Party and especially encouraging females to get involved in the political process,” Reynolds says, “and so I don’t think it would be uncharacteristic of me to reach out to Senator Ernst.”

“I encouraged Joni to seek that position and she was successful and really it goes back further than that,” Reynolds says.

“When she was deployed…through email we were connecting back and forth and I was encouraging her to run for the county auditor’s position, so our history goes way back in working together and really just encouraging qualified people to run for office, so she just hits it out of the park on both issues.”

AUDIO of news conference at which Reynolds made her comments, runs 9:26

Ernst, a member of the Iowa National Guard, was deployed to Kuwait 10 years ago. Ernst served as Montgomery County’s Auditor for six years, from 2005 through 2011. Ernst said in late April that she was considering a run for the U.S. Senate, but waiting for Congressman Steve King’s decision.