You are here: Home / Fires/Accidents/Disasters / Wettest spring in 141 years of records 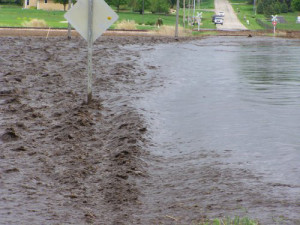 Flood water rushes over a road in Plymouth County.

Iowa’s weather has now officially completed its turnaround from dusty to soggy.

The governor assembled a task force in January of this year to prepare to deal with drought conditions that were extreme or severe in 58-percent of the state.

Fast forward to now and State Climatologist Harry Hillaker has confirmed that May will be the wettest in 141 years of record-keeping with an average of 8.66 inches of rain.

“We’ve also got the wettest spring of record — that would be the months of March, April and May — this year 17.48 inches of precipitation, over two inches above the previous record, which was set in the spring of 1892,” according to Hillaker.

“We’ve also got a record year-to-date total as well — this year up to 19.75 inches — and that is a little more than two inches over the previous January through May record, and that was set in 1973.” Hillaker is on the drought task force and never figure we’d go from talk of water rationing to have communities sandbagging and sump pumps working overtime.

He says it’s much more common to have years following a drought to be on the drier and warmer side. Hillaker says the last time he could find this big a turnaround from hot and dry in Iowa to soaking wet was over 100 years ago.

“In 1901 we had one of the hottest-driest summers ever, actually one of the driest calendar years ever, and followed the very next year, 1902 was the fourth wettest year on record in Iowa,” Hillaker says.

He says 1947 saw things go from wet to dry. “A big flood year — especially in the Des Moines River basin — and kind of the impetus for the Saylorville and Red Rock reservoirs being built later on to prevent a recurrence of that,” Hillaker says. “But a very big flood year, a very cool-wet spring, a record wet June, and again it was like someone had flipped the switch. August of ’47 is still hottest August on record in Iowa. So, another year where we went to the other extreme.”

Is there a chance the wet spring this year could turn into a hot, dry summer?

“Well it could happen. Again if you just play the historical odds it’s not real likely to go back to the other extreme,” Hillaker says, “but there’s been a few cases where that did happen. Most recently in 1983 where we had a cool-wet spring — not as wet as this current one but almost as cool — and it was like someone turned a switch and we went to very hot and dry just very suddenly. And it was very hot and dry for virtually all of July and August.”

The latest state water summary shows over 81-percent of Iowa is drought-free and most of the rest of the state has been upgraded to abnormally dry.