You are here: Home / Military / F-16’s prepare for final flights out of Des Moines (audio) 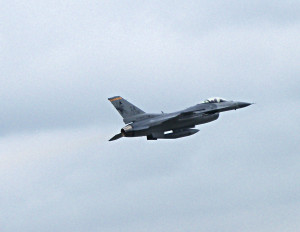 F-16 flies out of Des Moines on a training mission. (click photo to enlarge)

The Iowa Air National Guard F-16 fighter wing based in Des Moines is conducting some of its last ever summer training missions as the air wing prepares for a big transition.

The leaders of the 132nd invited reporters to the flight line to view some of the training as the wing prepares to switch from the manned F-16 fighters to the unmanned M-Q-9 reapers.

Unit spokesman, Major Ken Hartman, says the F-16’s will gradually each take off for a final flight out of Des Moines.

Hartman says they will slowly phase out the F-16’s throughout the summer and fall as the jets are flown to other guard units.

About 80-percent of the currentmembers of the wing will stay on for the new mission.

“We’ve got guys out here — F-16 pilots, F-16 maintainers — guys who really love their job. With the new missions, some of these guys are sliding on to other missions so that can continue to do what they love — flying F-16’s or maintaining F-16’s,” Hartman says.

“And then you’ve got other guys out here who are pretty excited about the new opportunities that are coming our way.” He says the guardmembers like it that some of the new jobs will be high-tech pay more and they will be 24-hours-a-day. Iowa’s Congressional delegation and Governor tried to keep the F-16’s in Des Moines, but lost that battle. 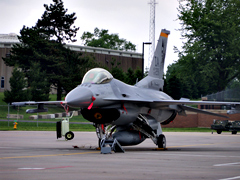 Hartman says they did end up with a better outcome than was first proposed with only 30 some positions being lost.

“When this announcement first came out that they were going to undergo a mission change, they were talking about some 380 jobs going away — whether those were fulltime or part-time,” Hartman says.

“With just 30, we really turn over over 10-percent of our force every year anyway. And so with a thousand people here, this 30 transition is over the course of a couple of years. We won’t really lose anybody so to speak, they will just go away through retirements.”

The Reapers will not be physically located at the Des Moines base, marking the first time in 72 years there will not be manned aircraft there. The wing began flying observation planes back in 1941. Hartman says they will fly Reapers that could be based anywhere in the world.