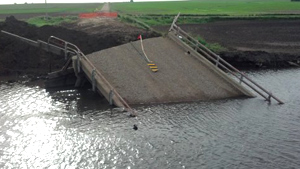 A flood-damaged bridge has collapsed in northwest Iowa. It’s located on 110th Street about 6 miles north of Remsen.

Plymouth County Engineer Tom Rohe says the bridge that spans Willow Creek was severely damaged by floodwaters in late May and was scheduled for repairs.

“As we started to work on that, the bridge collapsed,” Rohe said. Additional storms this month likely damaged the bridge even more following the initial flooding over the Memorial Day weekend.

Now, crews are trying to determined how to remove the fallen bridge from the creek.

“Because of the amount of scour we had around the abutments, we’ve got quite a distance to even reach the bridge,” Rohe explained. “So, to remove it is difficult with the equipment that we have. We’re looking at different options to try and pull it back closer to the bank and perform the removal operation from there.”

The cost of replacing the bridge is estimated at $400,000. Rohe expects federal and state dollars will cover part of the tab. “I would expect that we would get reimbursed a percentage, but exactly what that percentage is…we won’t know until they hold the kickoff meeting, probably within the next month,” Rohe said.

That kickoff meeting will involve Plymouth County Supervisors, representatives from the city of Le Mars, and federal and state officials. On Wednesday, a national transportation lobby group released a study and ranked Iowa’s bridges as the third worst in the nation. Transportation for America rates 21.2 percent of the state’s bridges as “deficient.”