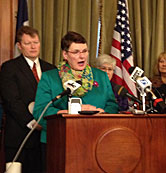 The chairman of the Iowa Republican Party has just issued a broad open records request, asking for any email three Democrats in the state senate may have sent to or about seven different people or any email that included references to confidential settlements or hush money.

Meanwhile, Jack Hatch — the Democrat likely to face Branstad on the ballot this fall — is suggesting Branstad should call upon Tom Miller, the state’s Democratic attorney general, to sift through the controversies and provide answers to the public.

“It’s to my advantage as a candidate for goveror to string this out for months and I’m proposing today a way in which we can get to the answers faster,” Hatch told reporters this morning. 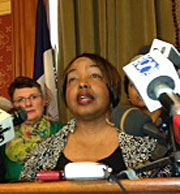 Representative Ruth Ann Gaines, a Democrat from Des Moines who is a member of the Legislature’s Oversight Committee, said Iowans “no longer trust” the governor and his staff “to provide timely or accurate information” when allegations of misconduct surface.

“We feel it’s time for the legislature to investigate and get to the bottom of these scandals and restore faith in our state government,” Gaines said during a statehouse news conference.

The top Republican in the House accused Gaines of engaging in “political theater.”

Governor Branstad told reporters this morning that legislators should focus on getting the work of the 2014 legislative session done rather than focusing on him.

“Boy, this sounds like partisanship at its worst,” Branstad said, answering the last question at his weekly news conference (AUDIO here). “What we really need to do is try to improve public policy. Instead of making all these accusations, using charged words, they ought to be sitting down and working with us.”

The Iowa GOP’s chairman says the legislature’s investigation “risks becoming a farce” if Democrats fail to respond to his request for the email of the three Democratic senators.  Democrats, meanwhile, say they’re still waiting for Branstad officials to respond to their requests for documents.