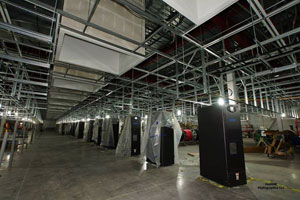 Facebook hasn’t yet completed building a massive data center in central Iowa, but officials with the social media giant announced Monday they’re planning to construct another similar size facility on the site.

“We hope to have the first building complete by Q1 of 2015. It’s a little too early to be able to say exactly when the second building will be completely kicked-off and finished,” Towns said.

The “Altoona 2” building is expected to be the same size as the first data center, which covers 468,000 square feet. “It will be a mirror image of the building we’re working on today,” Towns said.

The plans are expected to be reviewed tonight by the Altoona Planning and Zoning Board. Facebook officials have promised the State of Iowa that the first data center building, once it’s up and running, will employ 30 full-time workers.

Towns said around 460 production personnel are currently working on construction of the data center. Facebook was awarded $18 million in state tax credits last year for the project. Officials have said the 200 acre site just north of Interstate 80 could eventually house three data centers with a total investment of $1 billion.

The data centers are expected to draw power from Iowa wind turbine farms.