You are here: Home / News / Branstad says Senate’s use of subpoena power “bizarre” but not a “crisis” 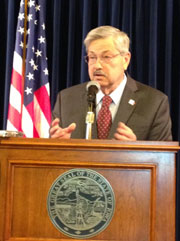 The Republican leader in the Iowa Senate on Friday suggested Democrats in the legislature are “inviting a constitutional crisis” in state government by using subpoena power in their on-going investigation of executive branch hiring and firing practices, while Republican Governor Terry Branstad today said it’s “bizarre” but it is not a crisis.

“Our administration is totally open and willing and we have already provided thousands of pages of documents,” Branstad said during his weekly news conference. “…We have nothing to hide and we’re not concerned.”

However, Branstad said there are “real constitutional questions” about whether Senate Democrats, without the support of House Republicans, passed a resolution giving the Oversight Committee broader investigatory powers.

“It’s pretty curious that Senate Democrats waited ’til the House adjourned in the middle of the night to bring this up,” Branstad said. “That looks pretty bizarre in and of itself.”

Branstad accused Democrats in the senate of continuing the Oversight Committee’s investigation to help state Senator Jack Hatch, the Democrat who is likely to face-off against Branstad in November’s election.

“To me it’s kind of curious, the senators won’t release their emails to show the coordination between Senator Hatch’s campaign and the people that are on that committee,” Branstad said.

“There’s no coordination,” Hatch told reporters today. “…Legislators probably from both parties are getting emails from constituents.”

Hatch said it’s important to protect “whistleblowers” who are sending email to legislators to report alleged misdeeds in state government. Hatch has received “a couple” of emails from state employees and Hatch has forwarded them to the Senate Oversight Committee. As for the “constitutional crisis” charge, Hatch said using subpoena power to compel people to testify before the Senate Oversight Committee is nothing new.

“We’ve subpoenaed the executive branch before on previous legislative investigations in (the) Oversight (Committee). This is the only way we’re going to get to the truth,” Hatch said. “This is very sensitive. People may not want to talk about it. If they can avoid it, they probably would, but the truth has to be found out and we have to work hard at getting it and the subpoena is a way for us to get to the truth.”