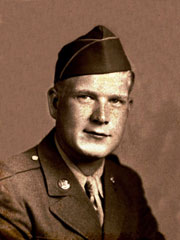 The remains of an Iowa soldier killed in World War Two have been identified and are returning to the state after nearly 70 years.

Iowa National Guard spokesman, Colonel Greg Hapgood, says the identification of the Iowan came after some German citizens found the wreckage of B-26 bomber in 2012. “One of the crewmembers in that aircraft was an airman from Iowa, Staff Sergeant Robby “Bobby” Howard, who was born in Moulten and grew up in Moravia,” Hapgood says.

Howard was a 21-year-old serving in the 450th Bomber Squadron, 332nd Bomber Group of the 9th U.S. Army Air Corps Air Force. He was an engineer/gunner on the flight that took off from a base in Belgium on April 16th of 1945 for a bombing mission and was later shot down. “This particular case happened near Mulangen in Germany, which was somewhat of a rural area. And it appears that immediately after the crash, those airmen who died in that crash were actually buried there by local residents,” Hapgood says.

The bodies of soldiers who die in crashes in dense jungle areas are often hidden and not found for decades. In this case, Hapgood says the political aftermath of World War Two kept the bodies from being returned to the U.S. “After World War Two the Soviet Union took control of certain areas of Germany and the U.S. was unable to get access to those areas to search for these aircraft,” Hapgood explains. “So this is one other piece of post-Cold War that the United States was actually able to go to this site and recover artifacts and remains of our airmen.”

Robert Howard graduated from Moravia Public School in Moravia, Iowa in 1941 and participated in marching band, orchestra, concert band, and dramatics. He enlisted in the U.S. Army on March 16, 1943, and transferred into the U.S. Army Air Corps. Howard’s family will hold a memorial service on Saturday. “Staff Sergeant Howard has five siblings that survive. He had one sibling that died previously and his parents are also deceased as well,” Hapgood says. “This is a tremendous opportunity for this family to have closure after so long.”

The memorial service for Staff Sergeant Robert Howard will be held at the Sunset View Cemetery, Moulton at 11 a.m. Saturday. The cemetery is located north of Moulton, at the northeast corner of Highway 202 and 535th St. The public is welcome to attend the memorial service. Howard is survived by brothers Harold and Dennis, both of Des Moines, sisters Evelyn Lewin of Indianola, Janie Ballanger of Coatsville, Missouri and Evelyn June Nace of Tulsa, Oklahoma.