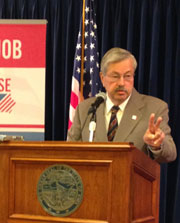 “It would be my hope that we could review the court decision and work with legislators with the intention of doing something in this next session to address this issue,” Branstad says, “and make sure the safety of the citizens of Iowa is protected.”

The court ruled mandatory minimum sentences for juveniles do not distinguish between the diminished capacity of a young person and the cold and calculated conduct of an adult. Branstad says public safety should be “paramount.”

“When we have a juvenile that commits a murder of a violent, dangerous crime, if they’re treated as a juvenile when they turn 18 they can be released and we don’t dangerous, violent people being prematurely released and endangering our citizens,” Branstad says. “We don’t want to become Chicago.”

In 2010, the U.S. Supreme Court ruled that juveniles cannot be sentenced to life in prison for crimes other than murder and Iowa legislators deadlocked on how to respond, so the governor issued an executive order commuting all those life sentences to 60 years. Last week’s Iowa Supreme Court ruling directed state officials to resentence about 100 juveniles who were tried before 2013 and received mandatory minimum sentences.

“As I understand, this was a 4-3 decision and it went beyond what other states have done and so I think we’re going to work with the legislature and review and look at what is the appropriate response to make sure the public in Iowa is protected,” Branstad says.

Two of the justices on the Iowa Supreme Court wrote dissenting opinions, arguing the court’s majority had gone too far in interpreting recent U.S. Supreme Court guidance that juveniles should not be treated differently than adults in criminal sentencing.

Branstad made his remarks at the end of his weekly news conference.