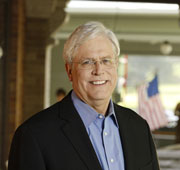 Jack Hatch, the Democratic candidate for governor, says it is “disturbing” that Governor Branstad returned a federal grant that was to be used to find ways to help the solar energy industry grow in Iowa.

“Not to be controlled by the special interests of the utility companies that pressured his department to return the million dollar grant,” Hatch says. “That in itself shows the interests of this governor, not so much in really renewable energy, but protecting the larger corporations at the expense of the smaller producers and the individual homeowners that could benefit dramatically from this.”

Hatch says the solar industry is poised to make the same kind of economic impact on Iowa as wind turbines.

“The governor has backed away from this state’s ability to enter into the solar market by his refusal and his returning of a grant back to the Department of Energy that would be a modest approach to us beginning our solar energy capability,” Hatch says.

Email correspondence obtained by The Associated Press shows the State of Iowa returned the million dollar grant after Iowa utility companies complained about how the grant money would be used and insisted any reference to solar power’s benefits also include a list of its draw backs.

“This is something that’s going to make an enormous impact on the economy of this state and he’s just turned a blind eye because of the utility companies,” Hatch says.

A spokesman for Governor Branstad issued a written statement.

“Jack Hatch can continue to bloviate from the sidelines, but all Iowans know that the Branstad-Reynolds administration has fought to expand and protect American energy resources so that Iowans have cheaper costs at the pump, their homes and their businesses,” said Tommy Schultz, Branstad-Reynolds communications director.

Hatch is also praising a July 11th Iowa Supreme Court ruling that opened the door to expansion of solar power development in Iowa. The court ruled any church, school, city or other “non-taxable” entity can enter in “power purchase agreements” with solar power developers. It means a company can install solar panels on a public building and get paid for the electricity generated by the panels. Iowa’s two major utilities had challenged such deals, arguing that Iowa regulations gave MidAmerican and Alliant exclusive rights to sell electricity in defined areas of the state.

(This post was updated at 1:46 p.m. with additional information.)