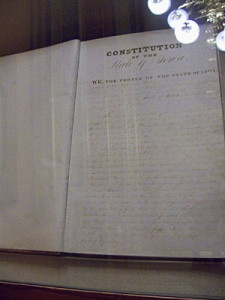 The original copy of the State Constitution of Iowa is kept locked under glass in the Secretary of State’s office.

A copy of the Iowa Constitution is now available in digital form on-line. Interim State Librarian, Barb Corson, says it is something they have wanted to do, and a new piece of equipment allowed them to follow through.

“About a year ago we purchased a specialized scanner that allowed us digitize fragile materials and we had the idea to digitize the State Constitution of Iowa for the first time ever,” Corson says.

The scanner cost the state $23,000 and Corson says it is used for a variety of documents. She says it took around one year to plan out how to scan the document, and that  included an escort by a state trooper from the Secretary of State’s office to the building where it was scanned.

Once everything was in place, it didn’t take long to complete the project. “Two hours to scan, and then we had a process of quality control that we made sure every scan was accurate and that there weren’t any commissions or fuzzy parts,” Corson says.

Secretary of State Matt Schultz says the digital version of the Iowa Constitution provides access that they can’t give for the original version. “You can only see the first pages of the Constitution, it’s under glass, you can’t touch it,” Schultz says. “If you go on-line, you can see the entire document.”

The document was written in 1857 and State Library Archivist, Tom Keyser, says experts will be interested in comparing it to the interpretations of the document.

“The historical nature of the document being written at that time, of course it’ll be in the vernacular of that time, and with amendments over time and with corrections that may occur, the codified version of it on-line is more or less adjusted to today,” Keyser says.

The original document contains 40 pages of text, while the scanned version has 94 images that include the front and back cover. You can see the digital version of the Iowa Constitution on the State Library of Iowa’s website .