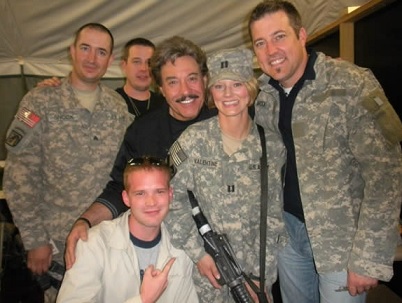 Tony Orlando (in black) visits US troops in Iraq

A singing superstar from the 1970s will be among the dignitaries in Iowa City tomorrow  for the dedication of a new diabetes research center at the University of Iowa.

Tony Orlando is a member of the Fraternal Order of Eagles, which raised $25-million for the high-tech facility.

In a phone interview with Radio Iowa from his home in Branson, Missouri, Orlando was asked if any members of his family had diabetes.

“My mother did,” Orlando says. “My mother passed away and she had probably what we know as a diabetic stroke two Februarys ago.” The 70-year-old Orlando grew up in the Hell’s Kitchen area of New York City and says he learned early on about the difficulties that came with physical and psychological impairments.

“My sister had cerebral palsy and was mentally retarded and at a very young age, I knew when there were health challenges in the family,” Orlando says. “It’s a very important part of the support system to have help.”

Any performer who’s worth their salt as an entertainer or as a human being, he says, gives back to the community. 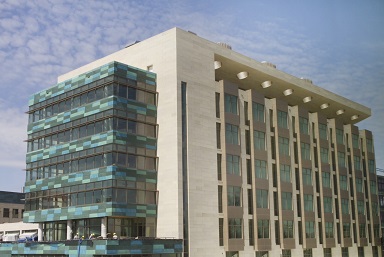 Orlando has been involved with entertaining since he was 16 and hit it big in April of 1973 with a sentimental pop song about a soldier returning home from Vietnam. “Tie A Yellow Ribbon Round the Old Oak Tree,” with the duo Dawn, was number-one on the U.S. and U.K. charts for four weeks.

Remarkably, the yellow ribbon tradition has continued for decades, welcoming American troops home most recently from Iraq and Afghanistan.

“I’ve been working with post-war veterans since 1973 when ‘Yellow Ribbon’ came out,” Orlando says. “That’s over 40 years of working with veterans and raising money for veterans’ needs.”

Orlando says he’s thrilled to be a part of Saturday’s research center dedication in Iowa City. He was asked if there would be a ribbon to cut, perhaps a yellow ribbon?

“Whatever color the ribbon is, it’s worthy of being cut and cut on a joyous occasion and one to be proud of,” he says.