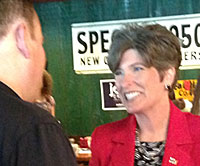 A crowd of more than 700 Iowa Republicans erupted in cheers tonight as the results of The Des Moines Register’s “Iowa Poll” of the U.S. Senate race were announced. The poll found Republican Joni Ernst leading Democrat Bruce Braley by six points.

“We are going to win this seat back this November,” Ernst said during a speech this evening at the Iowa Faith and Freedom Coalition’s fall banquet, laughing as the crowd applauded.

According to The Register’s poll, Ernst leads among independents and has a four-to-one edge in rural Iowa.

“A year ago who would have thought that a small town farm girl who teaches Sunday School and confirmation to seventh and eighth graders would be six points ahead of an eight-year congressman?” Ernst said.

Wisconsin Congressman Paul Ryan headlined a private campaign fundraiser for Ernst earlier this evening, then the two made the trek to the Iowa State Fairgrounds to briefly address the crowd of Christian conservatives.

“I am so excited about the news that we had this evening,” Ernst said. “We’ve been running neck-and-neck for so long, but I tell you, getting out there, meeting with Iowans, they see the difference, the clear difference between the trial lawyer who has gone all Washington, D.C. on us and that Iowa farm girl who is going to remain committed to all of you.”

Braley’s campaign manager released a memo, saying the Iowa Poll “is a snapshot of where this race begins.” The Braley camp points to Des Moines Register polls at similar points during past campaigns, including a September 1998 “Iowa Poll” that found eventual Governor Tom Vilsack trailing by 20 points. Braley’s campaign manager suggested the “sudden surge” for Ernst in the poll was because “spending by the Ernst campaign and her Republican allies has far surpassed spending on the Democratic side over the past few weeks.”

Braley and Ernst are scheduled to debate Sunday evening at Simpson College. The debate will be broadcast live at 5 p.m. on KCCI television in Des Moines and live streamed on The Des Moines Register’s website.