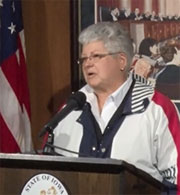 The Iowa Banking Superintendent today ordered an Anaheim, California online lender to pay $1.5 million in restitution and revoked the company’s license. The investigation by the Banking Division found “CashCall” charged borrowers interest rates of up to 169 percent through a company called Western Sky Financial — despite a state interest rate cap 36 percent.

Myra Xanders is one of 3,400 Iowans who got one of the loans. Xanders of Norwalk got a small loan with her husband to pay some taxes after seeing an ad on TV, but they were shocked after seeing the paperwork. “I got a phone call, they’d sold the account to Western Sky. My husband got the paperwork and when he (saw) the interest rate he came unglued,” Xanders says. “He said, ‘no way we are paying this interest rate’.”

She describes what she thought they would be paying on the loan of $2,500 “I think it was 135-percent, they never did tell me totally how much my interest rate was going to be,” Xanders says. That would have made the payoff double the loan itself. “I think we borrowed 2,500 and it was either between 4 or $5,000, or a little bit more than that. I know it was a lot,” Xanders says.

Xanders says they would have been better off working with the IRS to pay off the loan. The state will be sending information on the settlement payments to the borrowers who were impacted. Xanders says she feels sorry for others who had to deal with this company. “I had to close my bank accounts and reopen a new account. It was like a nightmare to us and I’d never do that again,” Xanders says.

The agreement was negotiated with the help of Attorney General Tom Miller’s office. Miller says the annual percentage rate charged on the loans was even higher, once fees and costs were factored in. In a response to a consumer complaint filed last year with the Attorney General’s Consumer Protection Division, CashCall disclosed that on one loan it charged the consumer an annual percentage rate of 340-percent.

Miller says CashCall tried to get around the Iowa law by claiming that Western Sky independently originated the loans on the Cheyenne River Indian Reservation in South Dakota and was subject solely to the laws and jurisdiction of the Cheyenne River Sioux Tribe.

The agreement also forbids CashCall from reporting Iowans to credit agencies, requires the company to request credit agencies to remove its past reports on Iowa borrowers, forbids the company from using or threatening to use Iowa courts to collect on loans to Iowans, resets interest rates on outstanding balances to four percent, and prohibits the company from attempting to collect illegal fees. The agreement does not prevent borrowers from pursuing their own legal claims.