You are here: Home / Human Interest / FIDO not working as well as hoped in Cedar Rapids’ battle with geese 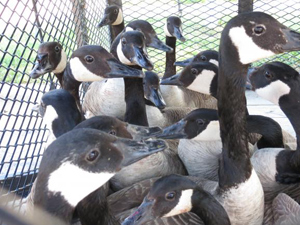 Officials in Cedar Rapids have struggled for years to control the population of geese within city limits and the latest gadget meant to scare the birds away is working, but not quite as well as expected. Parks workers introduced FIDO, which stands for “Fowl Intercept and Dispersal Office,” in the spring.

The orange-colored, remote-controlled device shaped like a dog was expected to chase the messy geese away from an amphitheater and keep them away. But Daniel Gibbins, Cedar Rapids Parks Superintendent, told KCRG-TV while the six devices, built by volunteers, did succeed in scaring geese, as soon as the controllers left with the devices the geese would return. “What we had hoped was after we chased them a lot and scared them off of a site, the amphitheater in particular, the geese would learn that’s not a good place to be because there’s an orange thing that will chase us. We found is that didn’t happen,” Gibbins said.

The FIDO devices did seem to do better when used on golf courses or parks away from the river. But the McGrath Amphitheatre on the banks of the Cedar River is apparently too tempting a location for the geese. So while they will leave the immediate area when chased, they return as soon as the tormentors leave. Gibbins believes the city will continue to use FIDO.

Another idea that might be employed next year would involve volunteers, who are already walking along the riverbank for exercise, chasing the geese a bit to keep them moving. “To scare them off, they would physically have to chase them because the geese get used to people and will watch them walk by. You have to run after them a little bit,” Gibbins said.

Next June, there are plans for another goose roundup where the Iowa Department of Natural Resources assists the city is capturing geese and transporting them to remote lakes away from city park areas. In 19 years, more than 6,400 geese have been rounded up in the relocation program. However, many of those adult geese return and the effort hasn’t seemed to make a big dent in the overpopulation in Cedar Rapids.

The city has tried other methods such as making it illegal to feed geese and playing recorded distress calls around the amphitheater stage.