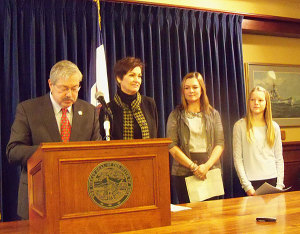 The governor talked about the issue during his weekly meeting with reporters. “This week marks the Hour of Code campaign, where students from all over the world will code together, including students from Iowa,” Branstad says. “The Hour of Code is sponsored by www.code.org and is an opportunity for…every K-through-eight student to experience the simplicity of computer programming.”

Branstad says coding is part of the focus on STEM or Science, Technology, Engineering and Math. Lieutenant Governor Kim Reynolds leads the governor’s STEM effort. “You know, awareness is growing that the basic understanding of coding is really important for today’s students. In Sioux City for example, the district is establishing a specialty elementary school in computer programming,” Reynolds explains. “Kids already are using Java-based script programs to better engage in math and reading instruction.”

Reynolds says the idea for the special school came from Hanah Rens, a student at Sioux City East High School who is the student member on the state Board of Education. “When the Sioux City Chamber was down here, Hanah was talking to us about it then. That she was passionate about coding and she wanted to do everything that she could, to not only to encourage that in Sioux City, but to help encourage that all across the state of Iowa,” Reynolds says. 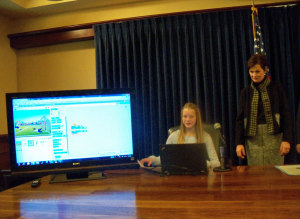 Megan Weis shows how to code an app for a soccer game.

Megan Weis, a seventh grader in West Des Moines, joined the news conference to talk about coding and what it means to everyone.

“Have you ever wondered about how all you apps actually work and how your phone knows exactly what you want it to do? The answer is through coding, and it is important we learn more about this because it is our future,” Weis says.

Weis is 12 and says a teacher got her interested in coding through the code dot org website. “There are tutorials that show you how to make a game, an app, a website or even a robot,” Weis explains. “And who wouldn’t be excited about making their own app or game?”

Weis likes to play soccer and demonstrated an app that plays soccer, and showed how easy it is to edit the app.

Valerie Jansonius teaches technology at a Waukee elementary school and says when she started teaching second graders she knew nothing about how to code, but quickly learned how to teach it to students through websites. Jansonius says you can start teaching 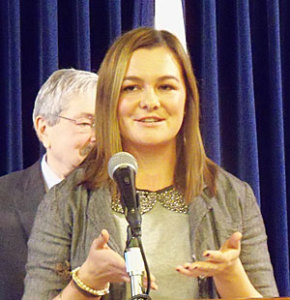 coding to students of all ages.

“There are courses honestly for pre-readers, so as young as four…but the course on code-dot-org is specifically for K-through-eight students,” Jansonius says. “And anyone can go in, they don’t have to go to school. Just go to code-dot-org and they explain everything there.” She says the programs are tailored to the skill of the students. “The first graders that I did it with, I mean, many of them are readers, but they have block arrows that they move around to problem solve the puzzles. So they use that versus the more difficult wording and scratch,” Jansonius says.

Other states have allowed computer coding to be a part of the math requirement for students. Lieutenant Governor Reynolds says that is something they will be considering. “We’re looking at all of the options, but that’s what they’ve done in some of the other states, they’ve allowed computer science to qualify as a math course or science course. That’s part of what we’ll be doing as we continue to research this and take a look at what other states have done, take a look at the statistics, the metrics they have put in place,” Reynolds says.

The governor says they’ve found that some of the agricultural courses are also important in the STEM field and they need to look at everything to ensure they are best preparing the students for today’s jobs.

The Hour of Code encourages schools to take an hour to have students go on-line and work on code to help them understand it.