You are here: Home / Fires/Accidents/Disasters / Traffic fatalities in Iowa increase in 2014 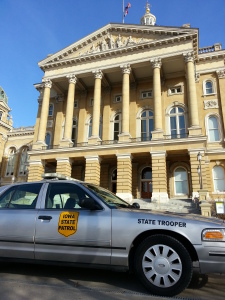 The number of people killed in traffic crashes in Iowa this year will likely be more than last year. The 317 traffic fatalities last year marked the lowest annual total since 1944. As of Tuesday of this week, the traffic fatality count for this year already stood at 317.

Iowa State Patrol Sergeant Scott Bright says there were some violent collisions last month on the state’s roadways that quickly raised the number of traffic deaths for the year.

“We had 40-some fatalities just in November,” Bright said. “I recall one where we had five fatalities just in one collision.” There was also a single weekend back in January when freezing rain made roads slick and 11 people lost their lives on Iowa roadways.

While most Iowans wear a seat belt when they’re in a vehicle, more than half of the people who died last year in Iowa traffic crashes were not wearing a seat belt. “What we’re seeing is a lot of people around small communities, if they’re just leaving their house and going three or four miles, they aren’t using their seat belts,” Bright said. “Most collisions usually occur 10 miles from your residence, so if people are going to leave their home for just a few miles, put that seat belt on. Seat belts do save lives.”

According to U.S. Department of Transportation figures, around 94-percent of Iowans routinely buckle-up in a vehicle. The national seat belt usage rate is 87-percent.