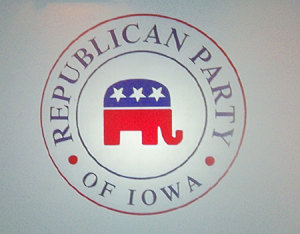 It appears the Iowa Republican Party’s governing board is poised to continue an event that’s been part of presidential campaigns since 1979: the Iowa Straw Poll.

The Iowa GOP’s state central committee meets Saturday to vote on whether to hold the event this August, in Ames, and it’s likely to serve as an opening organizational test for the latest crop of Republican presidential candidates.

“It’s a momentous decision which could have an impact, no matter which way they decide,” says former Iowa GOP chairman Richard Schwarm.

Critics of the Straw Poll have complained it gives Iowa Republicans two opportunities at the start of the campaign to winnow the field of candidates, as many of those who finish poorly in both the Straw Poll and Iowa’s first-in-the-nation Caucuses drop out of the race. Former Iowa Republican Party chairman Steve Grubbs suggests there may be an even more important Straw Poll this fall — in Florida.

Schwarm, a Lake Mills attorney who was Governor Branstad’s law partner, is among those who urged George W. Bush to participate in the 1999 Iowa Straw Poll, even though Bush had just formally entered the race two months before.

“Some of the folks had said he had everything to lose and nothing to gain if he participated. If he got first, well so what, but if he got second or third, well, he’s not as strong,” Schwarm says. “I argued that it was to his benefit to knock one person out — third place would become fourth place if he got in; that his supporters might go someplace else because they would want to be part of the action and the same national folks who were saying he’d be foolish to get in would say he ducked a challenge.”

Bush, who was governor of Texas at the time, won the 1999 Straw Poll and he is the last Straw Poll winner to go on to win the Iowa Caucuses as well. Grubbs was working on the Steve Forbes campaign during that 1999 Straw Poll and Forbes, who brought in country star Ronnie Milsap and put up an air conditioned tent so his supporters could escape the August heat, finished second, behind Bush. Grubbs says there’s “a lot of value” to candidates who’ve participated in the Iowa Straw Poll.

“There’s not a lot of news, especially political news, in the month of August and so this gives candidates a chance to get out in front of people nationally and be covered pretty much everywhere, so there’s certainly value in it,” Grubbs says. “I think there are some downsides, but on balance there are probably more benefits than negatives.”

Grubbs is an advisor to Kentucky Senator Rand Paul, who has been signaling he’ll run for president in 2016.

Jeff Kaufmann, the Iowa GOP’s current chairman, issued a written statement Thursday saying the Iowa Straw Poll does not violate new rules from the Republican National Committee. The rules were written to try to bring order to the 2016 presidential campaign and prevent states from trying to leapfrog in front of Iowa and other early states in the campaign season.

The very first Iowa GOP Straw Poll was held in August of 1979 and George H.W. Bush won the event in Ames, then went on to win Iowa’s 1980 Caucuses. Bob Dole won the 1987 Straw Poll and the 1988 Iowa Caucuses. Dole tied with Phil Gramm in the 1995 Iowa Straw Poll, but won the 1996 Caucuses. In 2007, Mitt Romney won the Straw Poll and in 2011 Michele Bachmann won the event. The Straw Poll is held the summer before competitive races for the Republican Party’s presidential nomination, so there was no Straw Poll held in 1991, when Schwarm was chairman of the Iowa GOP.