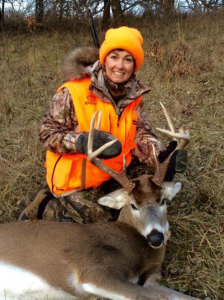 Hunters harvested 99,414 deer in 2013. That marked the first time hunters in Iowa killed fewer than 100,000 deer since the mid-1990s. Suchy recalls the first shotgun deer season in 2013 was highlighted by foul weather, which kept a lot of hunters out of the fields.

“This year, they had a little better conditions and that was where the biggest uptick in harvest came,” Suchy said. “And there was some better hunting maybe because last year harvest was down, so this year there were more antlered animals available.”

Hunters reported harvesting 6-percent fewer does (47,079) and 15-percent more bucks (44,495) this past year. The harvest data will be used by the DNR to help determine regulations for the next deer hunting season.

“We were expecting this kind of reduced doe harvest. I’m a little bit surprised with the increase in the buck harvest,” Suchy said. “We’ll have to look at our bow hunter observation survey where our bow hunters actually record the number of deer they saw this past year. Then, we’ll look at traffic kill and spotlight survey results and put those numbers together. We want a stable deer herd, we don’t want it to grow and create problems, so we may need to tweak some areas, but we won’t know that until we get all the data in.”