You are here: Home / News / Iowa Senate votes 44-6 for tougher rules on texting and driving 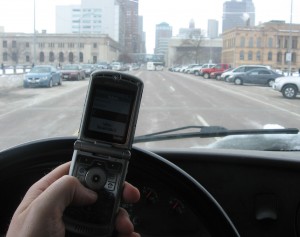 The Iowa Senate has passed legislation that would make texting while driving a primary offense. It means cops could pull someone over if they suspect the driver is texting. Under current law, texting while driving is a secondary offense, so an officer must see some other infraction and cannot pull someone over just on the suspicion that the driver’s texting.

Senator Tod Bowman, a Democrat from Maquoketa, says reading and sending texts while driving is “a recipe for disaster.”

“If it was just them that it was going to harm, that would be one story,” Bowman says, “but they’re putting us all at risk.”

Brad Zaun, a Republican from Urbandale, was among the six senators who voted “no” on the bill.

“What we cannot do down here, and we’ve struggled with over the years, is to legislate common sense,” Zaun says.

Senator Tim Kapucian, a Republican from Keystone, says he’s become a better “defensive driver” because of all the other drivers he sees texting.

“I can’t tell you the number of times I’ve seen cars coming across the center line at me. They grab the wheel and pull back, but then when I meet them they’re still looking down. They’re still texting,” Kapucian says. “I think the message needs to be sent this is not appropriate. This is something we need to constantly dwell on and I think this is a good place to start.”

Kapucian was among the 44 senators who voted for the legislation. A bill addressing the same topic is pending in the Iowa House. According to data from 2012, more than 421,000 people nationwide were injured in traffic crashes that involved a driver who was texting behind the wheel.