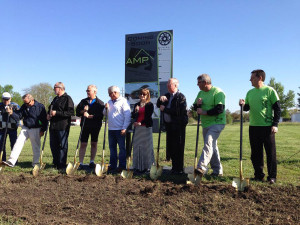 Groundbreaking for the Ankeny Pavillion.

A couple of big projects in central Iowa have been awarded Community Attraction and Tourism (CAT) grants from the Vision Iowa Board.

Board spokesperson Jessica O’Riley says just over $86,500 will help with the construction of an aquatic center in Story City.

The more than $2.5 million project was the subject of a bond issue approved by voters in Story City in November 2014. The new aquatic center should be ready for water enthusiasts in 2016.

“They’ll be working on it this summer, so I believe next summer will be the first year for it,” O’Riley says. The current public swimming pool in Story City opened in 1974.

The Vision Iowa Board today also awarded a grant of more than $280,000 to the City of Ankeny for the construction of a market and pavilion along a popular bike trail.

The High Trestle Trail, which runs between Madrid and Woodward, features a half-mile long, 130-foot tall bridge that spans the Des Moines River.