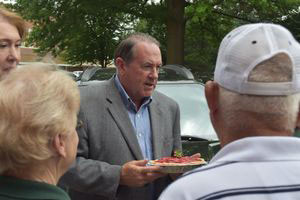 Republican presidential candidate Mike Huckabee — the former governor of Arkansas — is standing by his defense of an Arkansas family after revelations the family’s teenage son molested underage girls.

Last month, Josh Duggar — one of the stars of a cable TV reality show called “19 Kids and Counting” — confessed to molesting four of his underage sisters and a babysitter when he was a teenager after a magazine published police records of the case. In late May, Huckabee called Duggar’s behavior “inexcusable”, but not “unforgiveable.” Today, Huckabee stood by those remarks.

“I never regret standing with friends of mine, in this case someone that I knew since serving in the legislature,” Huckabee said. “You know, I just feel for his sisters who have been unfairly been paraded through a living hell becaue the media’s not interested in truth. They’re interested in exploiting a very unfortunate situation.”

Huckabee is campaigning in southwest Iowa today. Huckabee said the country “is in more trouble now than it was eight years ago” when he won the Iowa Caucuses and is “hurting” for new leadership.

“In the history of the Caucus no one has ever received more votes in a Republican Caucus win than we did in 2008,” Huckabee said. “But I’m mindful of the fact that we can’t count on any of that being automatic. We have to go back and win it and earn it just like we did eight years ago and that’s why I am, will be and can be depended upon to spend a lot of time in Iowa between now and February.”

Huckabee met with about 50 people at a cafe in Clarinda late this morning for nearly 90 minutes, with a stop this afternoon in Red Oak and early this evening in Creston — the same type of retail campaigning he engaged in during his 2008 run.

“Not everybody will come out of Iowa alive,” Huckabee said. “…We need to come out of here like a rocket and that’s our goal, to win the Caucus.”

Reporters asked Huckabee for his thoughts on Donald Trump’s entry into the Republican race. Huckabee noted Trump has indicated he’ll use his own wealth to finance his campaign. Huckabee joked that anyone who had thought about contributing to Trump’s campaign now is more than welcome to donate to the “Huckabee for President” effort.