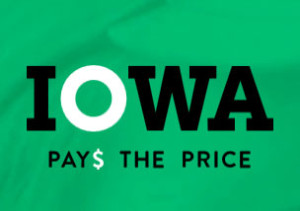 A new group called “Iowa Pays the Price” has formed to “educate” Iowans about the need for reform of campaign finance laws that allow donors to spend unlimited amounts to try to influence elections.

Five Iowans are co-chairs of the effort. Two are Democrats, two are Republicans and one is an independent. Democrat Brad Anderson ran Barack Obama’s 2012 Iowa campaign. He points out that mostly because of Iowa’s key U.S. Senate race in 2014, campaign spending in Iowa increased 350 percent compared to 2010 and, for the first time, the candidates themselves spent less than outside groups.

“I feel like it was just too much money and something needs to be done.”

Dietz was a candidate for the state senate in 2014.

“It’s an issue that kind of hit home with a lot of people on the doors that I knocked and the town halls that I held,” Dietz says. “People were always asking questions about why so much negative advertising and where is all this money coming from…so this is really an opportunity to kind of address those things in what turns out to be nice, in a really non-partisan way.”

Anderson was a candidate for Iowa secretary of state in 2014 and he says both Republican and Democrats voters told him they didn’t like the negative “tone” of the campaign advertising run by the outside groups.

“They were frustrated to the point where a lot of them didn’t even want to come out and vote,” Anderson says.

Dietz says “Iowa Pays the Price” is not pushing for a constitutional amendment that would supersede US Supreme Court decisions that struck down campaign spending limits passed by congress.

Over the next several months “Iowa Pays the Price” plans to release “detailed studies” about the outside groups that spent nearly $112 million in 2014 trying to influenced federal races in Iowa.