You are here: Home / News / Religious leaders want presidential candidates to back Pope on climate change 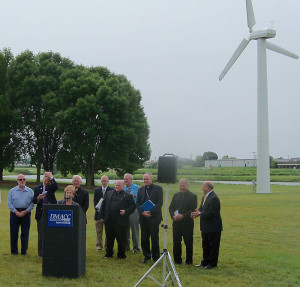 Catholic and other religious leaders want Iowans to ask presidential candidates their views on climate change.

Catholic leaders were joined by those from other faiths today to urge Iowans to embrace Pope Francis’ encyclical on the environment and ask presidential candidates to take a stand on climate change.

Father David Flemming read from a statement by Bishop Richard Pates of the Des Moines Diocese who is recovering from throat surgery.

“I invite all Catholics in Iowa to talk with their local, state and national leaders, urging them to exercise leadership in protecting the earth. We will have presidential candidates visiting our state regularly in the coming months. We have a unique opportunity to keep climate change on the front burner,” Flemming says.

The statement urges Catholics and those of other faiths to make climate change an issue for the presidential candidates. 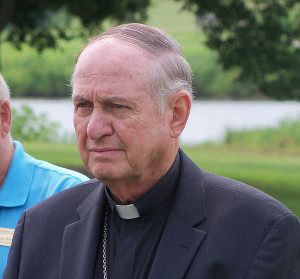 “Ask not if, but how they plan to work toward solutions to climate change,” he says. “I also urge Iowans to conserve energy. Use energy efficient appliances, and invest in renewable energy systems.”

The group was asked about the Pope’s call for “profound political courage” on the climate change issue. Father Bud Grant, a professor of theology at St. Ambrose University, answered. “These are going to be difficult decisions that have to be made and they are not necessarily going to be popular. They are not necessarily going to help a person to get elected,” Grant says. “But they’re fundamental, they’re essential, they’re vital. So that’s how I would interpret that, politicians have to have the courage to do the right thing, and not necessarily the politically expedient.”

The associate director of the Catholic Climate Covenant in Washington, Lonnie Ellis, was on hand and asked about where climate change ranks as an issue right now with the presidential candidates. “We’re still not hearing much about what Pope Francis says is one the principle challenges facing humanity and we are still not hearing much about it from any of the candidate. So, I think that’s pretty low right now in terms of them getting out and speaking about this issue,” Ellis says.

He says that is the task ahead for all faiths in Iowa. “We’ve got to get this much more on their radar. This is a moral issue for all of us to consider. And it affects all of us right now and all of our children,” according to Ellis. 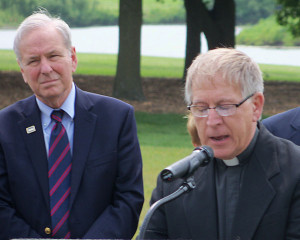 There are more Republican candidates in the presidential race than Democrats at this point, and it is often thought that party takes a more conservative view on climate change. Father Grant says the Pope’s call for action goes beyond any party.

“One of the things that theologians like to do is count words. “The Pope uses the words Democrat and Republican exactly zero times in the encyclical,” Grant says. “And when he talks about politics — you should understand — that word means government. It doesn’t really mean politics in that sort of partisan sense.”

Grant says the one word the Pope stresses is partnership. “I think a 170 times, it’s the most used word in the encyclical other than the words that have to do with God, religion and the earth. He wants us to build relationships with the earth and with one another. Fundamentally this is about all human beings, he addresses this encyclical to ‘every person on earth.’ So it’s not about political debate. He thinks we need to do what Lonnie just said, buckle down and get to work,” Grant says.

The religious leaders held their news conference in front of a windmill on the Des Moines Area Community College in Ankeny, and also talked about the importance of renewable energy to the state.