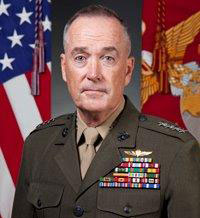 Iowa Republican Joni Ernst, the only female combat veteran serving in the U.S. Senate, predicts the senate will easily confirm President Obama’s choice to be the next Chairman of the Joint Chiefs of Staff, a key military advisor to the president.

General Joseph Dunford appeared Thursday morning before the Senate Armed Services Committee. Ernst is a member of that panel.

“He has been a service chief for a number of years. I have met with him on many occasions,” Ernst says. “We have discussed action all around the globe including what we see going on in Iraq, Syria, Afghanistan, of course the tension between Russia and Ukraine.”

General Dunford, a Marine who is the son of a Marine, earned the nickname “Fightin’ Joe” from his troops after he leapt into a fire fight in Iraq.

The Chairman of the Joint Chiefs of Staff is the highest ranking officer in the U.S. military and a direct advisor to the president. The chairman meets with leaders of the Army, Navy, Air Force, Marine Corps and National Guard to craft U.S. military strategy.