You are here: Home / News / Jindal promises to ‘say & do the things you’re not allowed to do & say’ 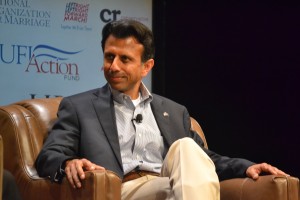 Republican presidential candidate Bobby Jindal is canvassing the state, vowing to visit each of Iowa’s 99 counties and promising to pursue “radical” change if he’s elected.

We don’t need another talker in the White House. We need a doer,” Jindal said. “And I’ll also tell you this: we need somebody who is going to say and do the things you’re not allowed to do and say.”

Jindal made his comments earlier this evening to a crowd of more than 60 in Ames. Jerry Lilleholm of Ames was impressed. Three GOP candidates with executive experience have risen to the top of his list: Jindal, Scott Walker and Donald Trump.

“I like Trump because he’s just straight forward. He’ll put issues on the table that others don’t want to be on the table to discuss,” Lilleholm said. “I think Bobby has a way of working with people and getting things done and when you get to Washington, that’s what you’ve got to be able to do is to be able to work across the aisle, just like Reagan and Tip O’Neill, and get things done. I’m not so sure Donald Trump could do that.”

Floyd Manwiller of Ames was also in tonight’s crowd. Among this latest crop of GOP candidates, he’s considering Lindsey Graham, Jeb Bush and Jindal — but not Trump.

“He’s a straight-talker, but a loose cannon, too,” Manwiller said of Trump. “I couldn’t see him in politics and international relations, trying to work with somebody like Putin or anyone else, talking like that and getting anywhere.”

And Manwiller worries candidates like Jindal can’t make their case to voters with all the media attention Trump is soaking up. Doris Decker of Des Moines liked Jindal’s “concrete” message, but she’s far from ready to choose a candidate to support on Caucus night.

And John Kasich — number 16 on the list of “official” candidates– formally entered the Republican race today. Kasich, who is the governor of Ohio, will campaign in Iowa on Friday.