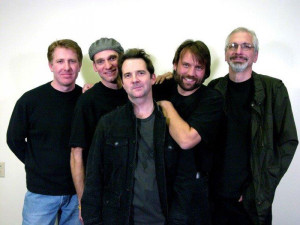 David Kachel (left) and members of the Sonny Humbucker Band.

A long-time Iowa Republican campaign insider has been diagnosed with an aggressive form of leukemia.

Fifty-one-year-old David Kochel has worked on Governor Branstad’s campaigns. He served as executive director of the Iowa Republican Party in the 1990s and he was Mitt Romney’s Iowa campaign manager in 2008 and 2012.

Since this past February, Kochel has been a senior advisor to Jeb Bush’s campaign, working out of Bush’s national office in Miami. Kochel was back in Iowa last week and went to the hospital Friday. Tests on Saturday confirmed he has acute lymphoblastic leukemia. He began chemotherapy immediately.

Kochel was an advisor to Joni Ernst’s 2014 campaign. He also managed Lamar Alexander’s presidential campaign in Iowa in 2000. Kochel is the owner of Redwave Communications, based in Des Moines. He is the drummer in the Sonny Humbucker Band, which formed in 2002.