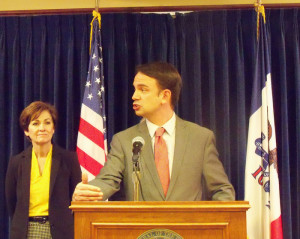 Ryan Wise talks with reporters about the TLC.

The plan is in its second year and Reynolds says all districts will have a plan in place in the next school year. “When fully phased in in the 2016 and 2017 school year, Iowa’s Teacher Leadership system will invest $150 million a year. And this is a critical investment and one that we are really proud to be making,” Reynolds says.

Wise says there is an adjustment period for the new system.”Those teachers taking on these leadership roles are doing so for the first time. And are being trained up and skilled in how to really work effectively with adults,” Wise explains, “and now it is a transition to have the same impact on adults. So, we expect those results to only grow over time.” Wise says he has heard good things about the program from the districts involved. 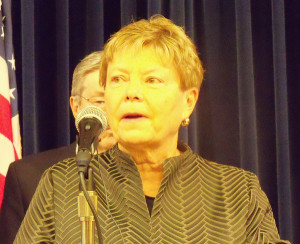 The Council Bluffs School District was one of the first to implement the plan, and Superintendent Martha Bruckner, says they’ve been pleased with their results.

“Our Iowa assessments in 2014, the district showed increased achievement in 16 of 20 grade level tests in math and reading,” Bruckner says. Bruckner says other surveys also found improvement in district performance, and there was an increase in morale among teachers.

Council Bluffs teacher, Samantha Adams talked about her experience with the program. She says it helped to have someone else review her teaching and help her. “I didn’t even realize changes were needed. We began with weekly discussions about the instruction I was doing and the student data I was seeing,” Adams says. “She asked me questions I had never thought of — some of which revealed that there were things about my teaching that could be vastly improved.” 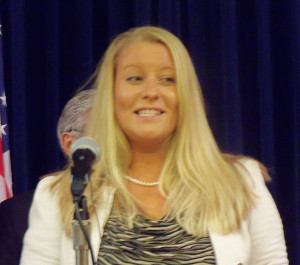 Adams says it helped to have an outside look at her work. “Our discussion and refleciton made me realize I was teaching to the majority — rather than ensuring that each student was challenged to go further and do better. The discussions forced me to reflect on things that I could do in my instruction that would increase all students’ achievement,” according to Adams. “I am not going to lie and say that that was easy to beging seriously reflecting on my current practices and collaborating on ways to get better and improve student achievement. It was seriously challenging work, and I could not have done it alone.”