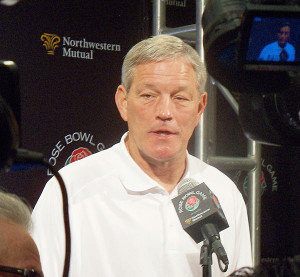 It’s media day today in California in the run up to the Rose Bowl. All the players from Stanford met with the media for one hour and then it was the Hawkeyes turn.

The weather is a little chilly by California standards, but Iowa coach Kirk Ferentz says it’s not been a problem as they’ve been in California since the 24th and have acclimated to the weather and the time change. He says it would be more of an issue if the temperature was hot.

Ferentz says everything has gone well so far as they prepare for the Rose bowl. “The hospitality — everything has just been first class tremendous — and our players, all of us have been appreciative of that. So, the hospitality has been great, the events are outstanding, yet there’s been ample time to prepare, and that’s what bowl games are all about,” according to Ferentz.

Ferentz says there have been a lot of new things for that players as a lot of players have never been to California and not in this situation.   “It’s fun as a coach to watch players experience that,” Ferentz says.   “And then the best part is still ahead, we get to play in the best bowl game there is against an outstanding championship football team. So, it’s going to be a great challenge for us.”

Things are new this time around for Ferentz too. “Before we ever landed we were excited about getting the berth in the Rose Bowl. For me personally, it’s been 30 years since I have been here. I was here 35 years ago as well. My memories are so distant of the Rose Bowl, it was a whole different experience too, we stayed in a little bit more remote areas,” Ferentz says. 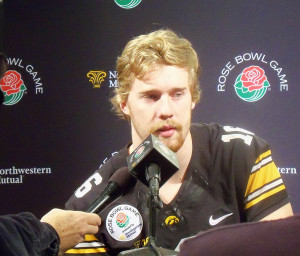 The players have been participating in a lot of events, but have also gotten back into the practice routine. Iowa Quarterback C.J. Beathard says the practices have gone well. He says they are back in the rhythm of game week, as they had practiced, but now are starting to get sharp.

“We’ve got a good game plan going into it,” Beathard says. He says the team has done a good job of focusing on the football part of the trip. “I think we’re ready to go and we’re excited to be playing on Friday when we know it is going to take our best, and we are going to have to play our best in order to beat them,” Beathard says.

He says they are aware it has been 25 years since Iowa has been in a Rose Bowl “I don’t know if it is an extra incentive, but I think everybody on this team and the coaching staff we want to win it because of the season we’ve had.” Beathard says. “I think the only right way to end the season is to go out with a win. You start the season 12-0 and then lose your last two games, that’s tough. In order to send the season off on a good note, we need a win.”

Iowa faces Stanford on Friday in the Rose Bowl.