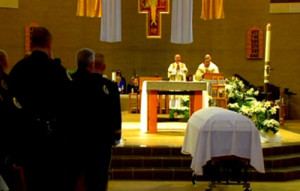 The service for Officer Carlos Puente-Morales.

Law officers from across the state and the country packed into St. Francis of Assisi Catholic Church in West Des Moines this morning for the funeral mass of Des Moines police officer Carlos Puente-Morales.

Puente-Morales died last Saturday along with fellow officer Susan Farrell in a traffic accident on Interstate 80 near Waukee. Reverend Fabian Moncada talked to the officers, family and others who filled the church.

“Today we are gathered here by the sadness of having to say goodbye to someone we knew and loved. We do not want to have to part with him, and the farewell that we must say is painful,” he says. But he says the Catholic faith gives them the hope of the resurrection.

“For we know that for all the good that this brother of ours has done, and to whom today we say farewell, for all the care and service that he provided to others, God gives him life forever,” the priest says. Puentes-Morales was in the Iowa National Guard and worked as a police officer in Eldora, Dows and Ottumwa before taking the job in Des Moines.

Bishop Richard Pates of the Des Moines Catholic Diocese had to be out of town, but sent a letter that was read during the mass. 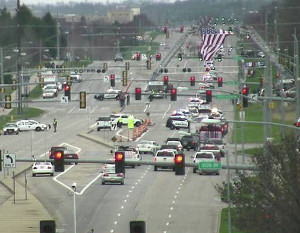 The funeral procession moved under a large American flag on the way to the cemetery.

“Through the tears and deep sorrow, we must thank God for Carlos. He was an exceptional man and we are blessed by his remarkable selfishness,” the letter said. The Bishop’s letter noted the many people the officer touched in his life.

“He was deeply cherish by his family, by his community, by his Catholic brothers and sisters, particularly the Knights of Columbus,” the letter said. “For the gift he has been over these 34 years — we owe a deep gratitude to God.”

Des Moines Police Chief Dana Wingert talked about Puente-Morales last night during the visitation. “It seems almost selfish and short-sighted to refer to our fallen friend as officer Puente-Morales — because Carlos was so much more than that. He is a father a son, a brother, a loved one, a soldier, and a friend to many people because of the lives he touches,” Wingert said.

A large procession of police cars followed the hearse carrying Puente-Morales’ body to the Iowa Veterans Cemetery near Van Meter for his burial. Some of the out-of-state officers stayed in central Iowa following Wednesday’s funeral for officer Farrell, and some went home and were replaced by a new set of officers who traveled to Iowa.