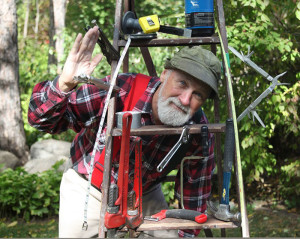 The actor known to millions for his folksy Canadian character “Red Green” is bringing his one-man comedy act to Ames Wednesday night, for the first of three Iowa shows.

Steve Smith and his wife are marking 50 years of wedded bliss this year and as part of his show, “I’m Not Old, I’m Ripe,” he shares some of his secrets to marital longevity and a golden anniversary.

“Communication is way overrated,” Smith says. “My wife says that I’m too quiet. I didn’t used to be. I used to say all kinds of things to her and it really didn’t go all that well. Now, I’m being quiet, that’s going better. She’ll say to me sometimes, ‘Why don’t you say what you’re thinking about?’ and I say, ‘I am.’ Sometimes a lack of communication saves a marriage.”

Smith’s masterpiece, “The Red Green Show,” ran its 300th and final episode ten years ago this month, yet the show is still airing on Iowa Public TV and many other PBS stations. Smith says he’s as surprised as anyone at the show’s incredible staying power.

“This whole project has been a miracle,” Smith says. “It was supposed to be a summer job in 1990 and here we are, 26 years later. I retired in 2006 but the character and the brand and all of that stuff just wouldn’t go away. There was something that the audience seemed to like. Even now, I meet kids, 8, 9 and 10 years old that are watching the show on YouTube. They don’t realize it was ever on television.”

Now that the hugely-popular “Downton Abbey” has concluded its run on PBS, Smith was asked if he’s now the network’s top-rated show, perhaps toppling even famed band leader and accordionist Lawrence Welk.

“No, no, no way,” Smith says, laughing. “People still call in to PBS and ask when Lawrence Welk is going to do new shows. I don’t think I’ll ever reach that status.” Welk hasn’t produced a new show since 1982 and he died in 1992, but his musical shows remain highly-rated on Public TV.

Toronto-born Smith marked his 70th birthday last December and is now on his third comedy tour of the U.S. with no immediate plans to stop roving. He says the show isn’t really a stand-up act, but it’s more like Mark Twain with audio/visual aids.

“I have never had more fun than I’m having doing these tours,” Smith says. “This is the most enjoyable thing I’ve ever done in the entertainment business. I’m going to do it as long as I can. I don’t need to do it but I really like it and the audiences seem to support it so, as long as they’re there, I’ll be there.” The show that made him famous is set at the fictional Possum Lodge and is a parody of many home improvement, do-it-yourself, fishing and outdoors shows.

Smith laughed when he was asked if he uses as much duct tape in real life as his alter-ego, Red Green. “It’s got to be against the law to use duct tape as much as Red does,” Smith says, chuckling. “No, the odd time, I always have a roll around. Believe me, it’s a great emergency tool but it’s not something you should necessarily go to first.”

In addition to tomorrow night’s show at Stephens Auditorium at Iowa State University in Ames, Smith will appear in Ottumwa on April 20th and Davenport on May 1st.