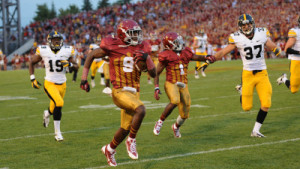 The Hawkeyes and Cyclones played under the lights in Jack Trice Stadium in 2013. Photo courtesy/cyclones.com

The Big Ten Network made it official and announced that Iowa and Iowa State will meet on September 10 in Kinnick Stadium with a 6:30 p.m. kick off. In addition, BTN announced the Hawkeyes’ November 5 game at Penn State will be played under the lights and kick at 6:30 p.m.

“Competing for the Cy-Hawk Trophy under the lights in Kinnick Stadium will provide a great atmosphere for our fans, and will serve as a showcase for our historic venue to a national audience,” said Iowa athletic director Gary Barta. “We are excited to host two night games for the second straight season. Being selected for three prime time games overall is a reflection of our past success and respect for our product.”

Iowa’s November 12 game against Michigan in Kinnick Stadium will kick off at 7:00 p.m. and will televised by ABC or one of the ESPN networks.

The Cy-Hawk Series contest has been designated as Iowa’s Black and Gold Spirit Game, with the annual stripping of Kinnick Stadium. Iowa and Iowa State have played just one evening game in Kinnick Stadium, with the 2002 contest starting at 5:00 p.m.