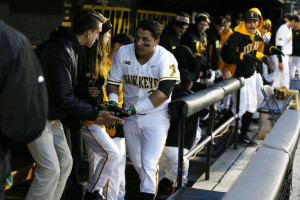 Time is running out on Iowa’s postseason hopes as the Hawkeyes get set to host Michigan State in a three game Big Ten series.

The Hawkeyes sit in 10th place in the league standings with an 8-10 record, two games behind Maryland, Ohio State, and Penn State; Illinois is ninth with a 9-9 record. The top eight teams advance to the Big Ten Tournament.

Iowa holds tie breakers over Maryland and Illinois by virtue of series wins, but Ohio State holds the tie breaker over Iowa after taking two of three games last weekend in Columbus, Ohio.

Iowa closes out the regular season next week with a three game series at Penn State.

The Spartans are tied for fourth with an 11-7 Big Ten record and are 32-13 overall. Michigan State has dropped two of its last three conference series, both at home against Indiana and Nebraska with a road series victory over Michigan in between.