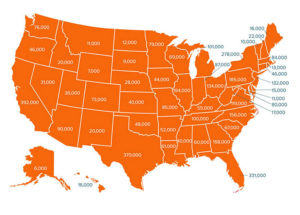 Employers in Iowa are scrambling for more information on a new federal rule change on overtime pay.

The U.S. Department of Labor has raised the threshold on who’s eligible from around $23,000 to more than $47,000 a year. Rob Green, executive director of the National Council of Chain Restaurants, expects a lot of legal challenges in Iowa and elsewhere.

“We’re going to fight this,” Green say. “The regulation was just issued and we’re going to be going to lawmakers in Congress and telling the story of how it impacts Millennials. It impacts non-profit organizations, it impacts retail establishments, it impacts universities.” Green says employers in Iowa are looking at ways to manage the new ruling, like limiting hours or raising salaries to just over the threshold.

He says others workers could see pay cuts to offset the mandatory overtime. Green says, “If you’re working 50 hours as a manager, your employers can basically say, ‘Can’t afford that overtime, we’re going to bump you down to 40,’ and you’re going to be off the clock and it’s going to affect customer service.” Green calls the rule change a disaster.

He says, “What does that do for flexibility in the workplace, for career advancement, for an opportunity to move up the career ladder and to really get the experience you need to survive in this 21st century economy?” Under the change, the threshold was raised from $23,660 a year to $47,476.

Starting December 1st, employees who earn that amount or less will be eligible for time-and-a-half pay for more than 40 hours a week.