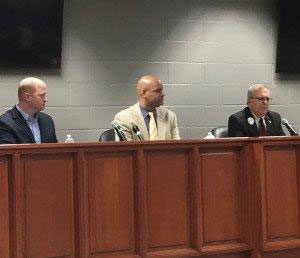 The three Democrats hoping to challenge Republican Congressman David Young in November are blasting Young for switching from “yes” to “no” on a vote last week.

Young initially supported a measure that would have banned federal contractors from discriminating against employees based on sexual orientation or gender identity. When it appeared the proposal would pass, however, Democrats started yelling on the House floor as GOP leaders lobbied Young and six other Republicans to change their votes and defeat the proposal.

“He simply proved once again that he has no courage or independence by switching his vote,” Mowrer says.

Democratic candidate Desmund Adams of Clive says discrimination “should not be tolerated in any form.”

“It’s obvious that Congressman Young has no moral compass when it comes to discrimination of the LGBT community,” Adams says.

The third Democrat in the race is Mike Sherzan of West Des Moines. Sherzan calls Young’s vote “shameful” and he is promising to protect all Iowans from discrimination “no matter who they love.”

A spokeswoman for the first-term Republican congressman says Young’s “no” vote was “consistent with his position and previous recorded votes on the issue.”

The three Democrats appeared at a forum last night in Des Moines. The three are scheduled to meet in a televised debate Thursday night on KCCI, the CBS affiliate in Des Moines.