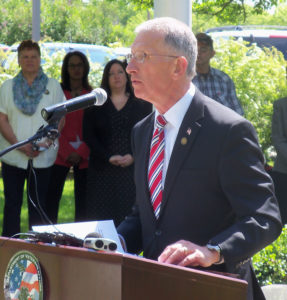 One of the first ceremonies in Iowa on Memorial Day will be held at 8 a.m. at the Iowa Veterans Cemetery in Van Meter.

“We have over 2,900 of Iowa and America’s veterans and their eligible family members interred at the cemetery,” says retired Colonel Robert King.

King leads the Iowa Department of Veterans Affairs and he’ll be at the ceremony on Monday morning. King occasionally presides over burials at the cemetery.

“It’s an honor to serve in this capacity, to give back, to serve our veterans and to help the families through the difficult times that they have,” King says.

The Iowa Veterans Cemetery opened in the summer of 2008.

The first U.S. soldiers to be buried in Iowa are from the Civil War era. The Keokuk National Cemetery is the final resting place for 600 Union soldiers, eight Confederate soldiers and 27 unidentified soldiers. The commander of the “Grand Army of the Republic” declared May 30,1868 as “Decoration Day” to mark the graves of the Union soldiers who died in the Civil War with flowers, but ceremonial days to mark the graves of both Union and Confederate soldiers had been occurring for a few years before that.

In 1967, a federal law officially named the holiday “Memorial Day.”