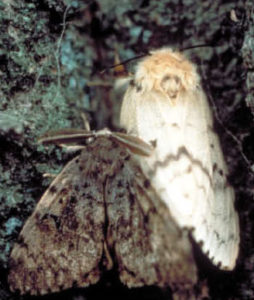 The state Department of Agriculture is planning an aerial campaign designed to shut down the movement of a destructive pest across the border into eastern Iowa.

The department’s Mike Kintner says they’ll be dropping pheromone flakes out of an airplane targeted at gypsy moths. “These are like a synthetic flake and the pheromone is infused in there. So, as it is released and it falls on the ground, it does biodegrade over time,” Kintner says.

The pheromones in the flakes are designed to disrupt the ability of the male gypsy moth to find female gypsy moths to reproduce. The hope is the disruption will keep the moths from expanding their territory further into Iowa.

“We’re going to be treating in Allamakee and Jackson counties because of some tracking we did last year revealed a couple of pockets where the gypsy moths are starting to develop. And we want to make sure we attack those before they get out of hand,” according Kintner. The plan is to do the air drop on two segments of land in Allamakee County totaling around 12-thousand acres, and another in Jackson County of around one-thousand acres. 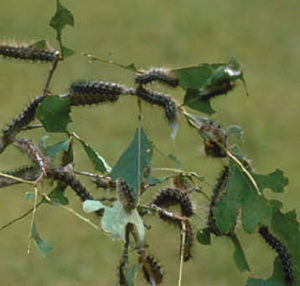 Gypsy moth larvae eat all the leaves off trees.

He says the pheromone release has proven to be successful in areas where the gypsy moth population isn’t very big. “This treatment has been going on for sometime…here in Iowa we have not really done it much. We’ve only done it two times — back in 2011 and 2013,” Kintner says. Kintner oversees the gypsy moth program and says they’ve been monitoring them for years with traps.

“The numbers here are still quite low, they’re mainly kind of moving in the northeastern part of Iowa,” Kintner says. “But it is primarily in the Wisconsin and Illinois side, but it is just starting to cross over into our zone.” The gypsy moths larvae feed on 300 different species of trees and shrubs, with oak trees as one of the favorite targets.

“When they attack those trees when they are in numbers — they defoliate the tree — and obviously that tree is stressed out by that,” Kintner says. “Trees can actually recover as long as they are not stressed to begin with and can put on some new growth. The problem is when the tree is attacked year after year after year, a tree can become stressed out and is more open to attacks from other pests.”

The pheromone flakes are specific to the gypsy moth and he says they shouldn’t impact anything else. The treatment is scheduled to start on Monday (June 27). It is being conducted through a partnership between the Iowa Department of Agriculture, the Iowa Department of Natural Resources, and the U.S.D.A. Gypsy Moth Slow the Spread Foundation.

Photos courtesy of the Iowa DNR.