You are here: Home / Fires/Accidents/Disasters / Drone used to aid water rescue near Algona 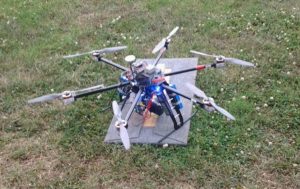 A remote-control drone was used to help rescue an older man and a girl who were stranded while canoeing on the East Fork of the Des Moines River near Algona last night.

The pair was late to arrive at their destination and when contacted by deputies, the elder reported having chest pains and being short of breath.

After using a TGI Phantom 4 drone to locate the stranded canoe, law enforcement paddled to the location and dragged the canoe to shore.

Fighting against darkness and difficult terrain, deputies and Algona firefighters carried the two to a waiting ambulance and Mercy Air Med flew the older patient to Mason City for treatment.

Kossuth County Emergency Management Coordinator Dave Penton says the water rescue was the first for him but they plan to practice it in the future.

Law enforcement has not released the names of the two canoeists.