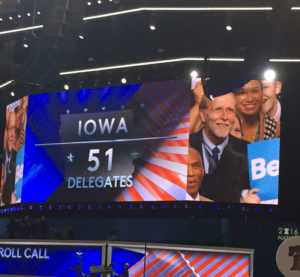 Iowa Democrats went with a “female firsts” theme during the roll call of the states at the Democratic National Convention in Philadelphia.

The first to speak was an 18-year-old Clinton delegate from Cedar Rapids.

“My name is Sruthi Palapniappan and I am from Iowa, a state of female firsts,” she said. “In 1857, the University of Iowa became the first state university to accept women into its degree program.”

Congressman Dave Loebsack of Iowa City mentioned a landmark moment in Mount Pleasant, when a woman took an exam.

“In 1869, Arabella Mansfield became the first woman in America to pass the bar and become an attorney,” Loebsack said.

Iowa law at the time forbid women from being lawyers, but shortly after Mansfield passed the bar exam, Iowa’s Supreme Court ruled women should not be barred from practicing law because of their gender.

The third Iowa Democrat to speak during the roll call was Danny Homan, president of AFSCME Council 61, a union that represents public sector workers.

“Fifty-eight person of our membership is female,” Homan said. “We believe in equal pay for equal work and dignity for all workers.”

“We proudly cast 21 votes for Senator Bernie Sanders,” McGuire said, pausing as delegates cheered and applauded, “and 30 votes for the first woman to be nominated by any party and the next president of the United States, Hillary Clinton.”

All four Iowans who spoke were Clinton supporters.

As Iowa’s delegation at the Democratic National Convention was in the spotlight, Senator Mike Gronstal of Council Bluffs was seen speaking on a phone. Gronstal says convention organizers called the floor phone placed in the Iowa delegation’s section, asking Iowans to be speedy in delivering their votes.