You are here: Home / Business / Conference at ISU helps veterans get into agriculture and entrepreneurship 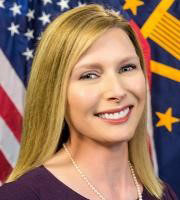 About one in ten small businesses in Iowa is owned by a military veteran and a conference underway today at Iowa State University is designed to boost that number.

Barbara Carson, with the U.S. Small Business Administration’s Office of Veterans Business Development, says the event in Ames is focused on veterans in agriculture and entrepreneurship.

“There’s quite a lot of growth opportunity in agriculture and we want to support that at the Small Business Administration,” Carson says. “We also want to highlight some of the opportunities in small business ownership, whether it’s a Main Street business or high-tech. Vets have incredible strengths as they leave the service and they want to come back to their communities and continue to serve by creating economic opportunities. That’s what we’re going to talk about today.”

The conference is being held at ISU’s Memorial Union. Carson is taking part in a 1 P.M. panel discussion along with Iowa U.S. Senator Joni Ernst and Major General Tim Orr, Adjutant General of the Iowa National Guard.

Carson is also leading a veteran’s roundtable discussion on Tuesday from 9 to 11 A.M. in West Des Moines. It will feature veteran-owned small businesses, veteran organizations and military representatives.”I want to hear directly from veteran business owners on the opportunities that they see and also to hear some frank feedback on the challenges they face and how we can come together to address those,” Carson says. “It’s always good to hear the success stories. It’s the best part of this visit.”

That event is at the West Des Moines Incubator in Valley Junction. While Iowa doesn’t have an active-duty military base, it does have a lot of veterans, National Guard members and Reservists. So far this year, 21 loans for a total of $4 million have been through the SBA’s Veteran’s Advantage Initiative here in Iowa.

“It’s a two-day course,” Carson says. “It’s an introduction to entrepreneurship and it will be offered on campus, completely free, open to vets and those currently serving including Reserve and Guard and military spouses.” She says more than 5 million Americans can say they work for a company that’s owned by a veteran.

Carson is an Air Force veteran and a 1992 University of Iowa graduate.

Learn more about the events at: www.veterans.iastate.edu