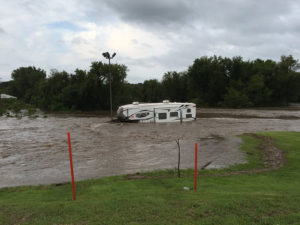 Flooding in Decorah near Highway 9.

The National Weather Service calls it a “flash flood emergency” in parts of northeast Iowa.

Evacuations are underway in the community of Freeport. Officials say roads have been washed out and they are warning of mud slides in northeast Iowa.

Decorah has been inundated and school has been canceled. Nearly 8.5 inches of rain fell southeast of Decorah. More than 7 inches of rainfall was recorded at Decorah’s airport. 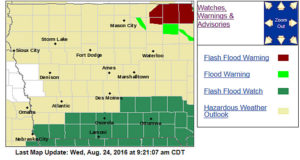 A flash flood warning remains in effect until early this afternoon for Winneshiek and Allamakee Counties as well as parts of Chickasaw and Howard Counties.

The National Weather Service calls it a “particularly dangerous situation” and the magnitude of the flooding is “a potentially historic event.”

Dan Baumgardt at the National Weather Service office in La Crosse has been monitoring the area.

“Northeast Iowa was particularly hard hit by storms last night,” Baumgardt says. “We have anywhere from six to just over eight inches of measured rainfall in that area and so a couple of areas in Winneshiek County — the Spillville and Freeport communities — are particularly hard hit with some evacuations going on there.”

“Thunderstorms formed mostly over Minnesota and Iowa and it seemed to just localize and we saw repeat rounds of thunderstorms over that area near Decorah, Iowa,” Baumgardt says. “That gave them the six to eight inches of rain.”

Mud slides are also possible in some areas.

“We do think that most of the levels will stay below that historical level,” Baumgardt says. “But it’s certainly major flooding through that area.”

The Turkey River in Spillville hit record levels this morning.