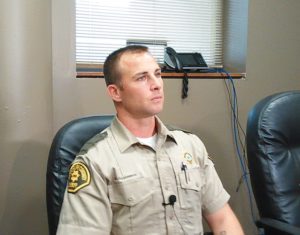 A Facebook post about a sheriff’s deputy who did “high-fives” with a sick boy in the hospital has gone viral.

Woodbury County Deputy Sheriff Kyle Cleveringa pulled a car over in Sioux City at about three a.m. Wednesday because a tail light and the light above the license plate weren’t working. When he walked up and spoke to the driver, Mindy Mathewson told the deputy her one-year-old son was having trouble breathing.

“I peeked in the backseat and I could hear he was audibly having some issues with breathing,” Cleveringa says, “…so I just kind disregarded the traffic stop.”

Cleveringa told the woman to keep driving to the hospital and he followed her all the way inside.

“I saw she had a bunch of stuff in the vehicle and so I just offered to help her out and carry some of the stuff in while she went to the emergency room,” Cleveringa says. “And then she obviously had her hands full trying to hold her kid, fill out paperwork — the typical stuff you do when you go to the hospital.”

Mathewson went on the Woodbury County Sheriff’s Facebook page to thank the deputy. She explained it was Cleveringa who held the boy while she filled out that paperwork. Mathewson wrote that the deputy did some “hi-fives” with the one-year-old while he comforted her sick child, plus he gave the boy a stuffed toy truck. Mathewson ended her post with a P.S. that her son is now fine and she promised to “get the lights fixed ASAP!”

The post was shared nearly 800 times in the first 24 hours it was up and has been “liked” thousands of times since. The deputy says he was just doing his job.

“I got two pieces of advice when I started this job:…’Don’t forget where you come from and remember who you serve,'” Cleveringa says. “She’s a part of the community and the sheriff’s department is big on community policing and community interaction and that’s one of the things that I like about working here.”

Cleveringa started working at the Woodbury County Sheriff’s Department three and a half years ago. He’s been a patrol deputy for the past year and wasn’t even scheduled to be working on Wednesday morning. He was filling in for a colleague who just had a baby.