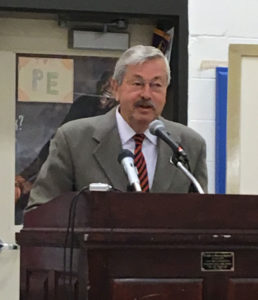 Governor Terry Branstad today said the crude oil pipeline that’s being constructed through Iowa was approved through a “reasonable and fair” process and critics “need to respect the decision that’s been made.”

“I understand that you’re never going to please everybody, but the vast majority of the landowners feel that they were treated fairly and appropriately compensated for the use of their land,” Branstad said this morning.

Branstad is not calling for an end to pipeline protests, however.

“I’m not going to tell people what to do and it’s just important that people abide by the law and they not endanger themselves or the workers that are working on the pipeline,” Branstad told reporters during a news conference in Des Moines.

Branstad has been a long-term booster of renewable fuels, like ethanol, but Branstad said given U.S. consumption levels, “100 percent of motor fuel” cannot be renewable and that’s why the pipeline is being built.

“Most of the landowners have been very willing to sign easements and have this cross their property and in fact they are being very well compensated and they’ll still be able to use the land once the pipeline has been put in place,” Branstad said, “so I think the process has been reasonable and fair. They have exhausted all of their judicial remedies and they’ve lost.”

There is still a pending lawsuit, however. Some landowners are arguing in court that state officials should not have given a private company eminent domain powers to seize their property for the project.

Iowa Citizens for Community Improvement has been organizing the pipeline protests. The group accuses Branstad of being a “big oil” backer and they cite the 2010 campaign donations Branstad accepted from Texas oil executives as well as his private meeting last year with a developer of the Bakken oil pipeline. Branstad, when asked about the criticism, told reporters the decision “was handled through the normal process.”

“I did not take a position on it,” Branstad said today. “I said it’s a decision that would be made by the utilities board. The utilities board, I think, was very thoughtful and very deliberative. They held hearings in every county (the pipeline would pass through). They spent a lot of time. They carefully researched it and made the decision that this was in the best interest to approve it.” 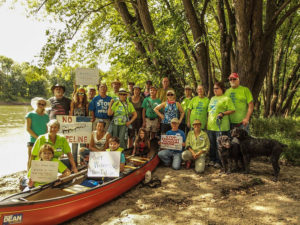 Branstad said it’s important that protesters “not interfere with the workers who are building the pipeline.”

AUDIO of Branstad’s extended news conference, 11:23, beyond first half hour (which is here).

A group of 40 protesters calling themselves “river guardians” began camping along the Des Moines River Saturday. Organizers positioned the campsite near where Dakota Access will drill under the riverbed to extend the pipeline to the other side of the river.