You are here: Home / Education / Fall enrollment up at ISU, U-I, down slightly at UNI 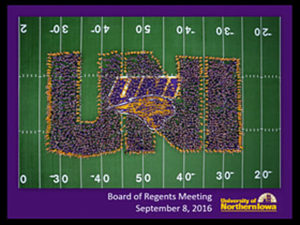 If size matters then Iowa State University can claim to be the top state school once again this fall. ISU president Steven Leath gave the Board of Regents an update on enrollment at their meeting today in Iowa City.

“Enrollment is is 36,660, which is our eighth consecutive record enrollment. In some regards we are very excited to see the enthusiastic demand for an Iowa State education,” Leath says.

Leath says the administration has to be concerned with how the size of the student body impacts the school’s ability to meet their needs.

“While the increase does set a new record, I think you’ll realize we’ve dialed back our growth significantly. This is more than what we’ll predict and plan for and effectively deal with,” Leath says. “If we are going to maintain high quality, accessibility and affordability with a limited increase in resources, we’ve got to manage enrollment a little more effectively.” This years increase is nearly two percent more than the previous record of 36,001 in fall 2015.

Overall enrollment at Iowa State has grown in the last decade by 11,198 students, or 44 percent. Leath says he is proud of some of the numbers includes in that enrollment. “We still have more Iowans than any university in the world and they come from all of our counties, but we set an all-time record for non-resident enrollment with over 15-thousand students,” according to Leath. “And we also set records for U-S multicultural students, international students… So we now have students from 125 countries around the globe and it’s a more diverse student body than we’ve ever had.”

Leath was asked how well the new students are prepared for college. He says the faculty senate did a study that raised concerns about preparedness.  “One of the things that came out of the faculty senate study that was fairly comprehensive is there is still a significant amount of students who are underprepared. And how that relates to admissions and transfers from community colleges and things like this is something we are going to have to find an effective way to deal with,” Leath says. “But it is clear from the faculty’s assessment that it is still an issue.”

Interim University of Northern Iowa president Jim Wohlpart says fall enrollment fell by 76 students. “Our total enrollment as of census last Friday was lower than expected. But I want to emphasize that when we did into these numbers….there is actually some good news here,” Wohlpart says.

He says the good news is in the size of the incoming class. “It is our third increase in the freshman class, and so as we get this large bubble of students through our enrollment will continue to increase. Last fall it was 1,916, so we do have more freshmen on campus this fall,” according to Wohlpart.

Wohlpart says one of the reasons for the drop in enrollment was the Cedar Falls school saw fewer transfer students. “The larger reason for the decline in enrollment — and this is the good news — is that our students are graduating faster than ever,” he says. Wohlpart says the graduation rates for three, four and five year students are the highest ever. “This is good news obviously that the students are graduating faster than they have — but that means that they are not with us any longer and we can’t count them in our enrollment numbers.”

Enrollment at the University of Iowa is up by more than 1,100 students to 33,334. President Bruce Harreld likes that number.

“The size we’re are at is fully utilized, and I think quite well, the resources we have on campus. I think our faculty are quite well utilized, I think our staff is the right size,” Harreld says. He says there is a danger in growing to much more.

“Taking a major leap if you will and saying we’re going to be a lot larger — I think would potentially be a really serious mistake, because it would put a lot of pressure on all the things I just mentioned, as well as campus safety and all the rest,” Harreld says. The U-I freshman class is 5,643 students, 402 more than in 2015.

He says the 5,400 to 5,700 class size where they are now is a good class size for the university. Harreld says the graduate and professional programs are also about the right size, although there are some pockets that could be larger, such as the law school. Twenty-four percent of the freshman class are first-generation students, and half are Iowa residents-a 16-percent increase from 2015. The U-I says the class represents 95 of 99 Iowa counties, 41 states and 38 countries.