You are here: Home / News / Aiming to activate college-age voters in Iowa (AUDIO) 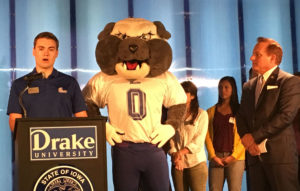 Iowa’s Secretary of State is touting voter registration efforts on the campuses of 38 colleges and universities in Iowa.

“It’s vitally important to make your voice heard and to be a voter,” Iowa Secretary of State Paul said to open a news conference at Drake University Thursday afternoon.

Pate is also unveiling a new website that can produce electronic reminders for all Iowa voters — including the more than 300,000 college students in Iowa.

“One of the most powerful features of the MyIowavote is the ability of a person to opt in to a series of reminders to vote,” Pate said. “So once you’re in, it will remind you that you have a school board election, you have a county election, and it will tell you where to go vote and give you the polling sites and the polling hours.”

“MyIowaVote” was created with “TurboVote” software. It will generate a text message, reminding voters where to go — and when — to get their ballots cast. Colleges and universities in Iowa have used the TurboVote software to tailor voter engagement campaigns on each campus.

“Young people cannot wait until the future to start voting,” University of Iowa student body president Rachel Zuckerman said yesterday. “We need to bring our activism to the ballot box now and we need to bring our youthful energy into our democracy to get our elected officials to care about these issues that matter to us.”

University of Northern Iowa student body president Hunter Flesch said a “voter palooza” on October 10 in Cedar Falls is part of the “all around push” to get students on his campus registered to vote.

“We all understand that this year is an extremely vital year to get students involved in the voting process,” he said. “However, being involved in the governmental process is something that goes beyond just this election. We want to create a culture not just at UNI, but in the state of Iowa that reminds students that they have a voice and that they can effect real change by voting not just in presidential elections, but also the local elections.”

“We could have a tremendous impact on this election and every election moving forward,” Staudt said.

“It is our civic duty and it is something, like all of my peers have said, shapes and will shape our country because we are the next biggest generation and we are the game changers,” she said.

Emilee, president of the “Democrats Club” at Grand View University in Des Moines, said there are now more than 75 million millennials in America.

“If we got out to vote, we would have our voices heard,” Harris said.

According to Robert Lyons, the student body president at Simpson College, 62 percent of Simpson students voted in 2012.

“Millennials are voting and we’re voting in greater numbers every year,” Lyons said. “Simpson students will be at the polls in November and I encourage other college-age millennials to join us.”

Millennials are people between the ages of 18 and 35.

The new text reminders about voting are available for any Iowa voter here.