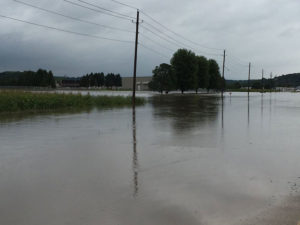 The governor is asking for a Presidential Disaster Declaration for Allamakee, Chickasaw, Clayton, Fayette, Floyd, Howard, Mitchell, and Winneshiek for the severe storms and flooding that hit from August 23rd to the 27th.

A joint federal, state, and local preliminary damage assessment of the 8 counties found the severe weather caused an estimated $4.8 million worth of damage.

The governor is asking for funding under the Federal Emergency Management Agency’s Public Assistance Program, which is used to rebuild damaged infrastructure that may include roads, bridges, culverts and other public facilities, or to cover costs of emergency work during, and debris removal after, the storms.